Formerly enslaved by Josiah Dayton. Other records have his enslaver as John Dayton.

Sale of a 1/2 acre parcel near the "Round Swamp Whalebone, so called," in East Hampton Township, N.Y., by Selah Pike to London (Dayton), "negro man formerly a servant to John Dayton," both of said township, for 33 shillings "to me in hand before sealing paid,"April 3, 1799.

1790 Census lists 2 enslaved people in the John Dayton household, and 1 "all other free persons."

See additional property records in the L.I. Collection, including a copy of a lease in Oneida, NY. (Also sometimes known as Lunnon) Also see Records of the Town of East Hampton V.4, p. 302. c. 1797-8 "London, a negro slave of Josiah Dayton."

Unclear if "John" was a mistake in the land deal 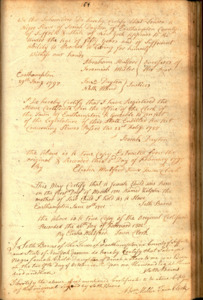